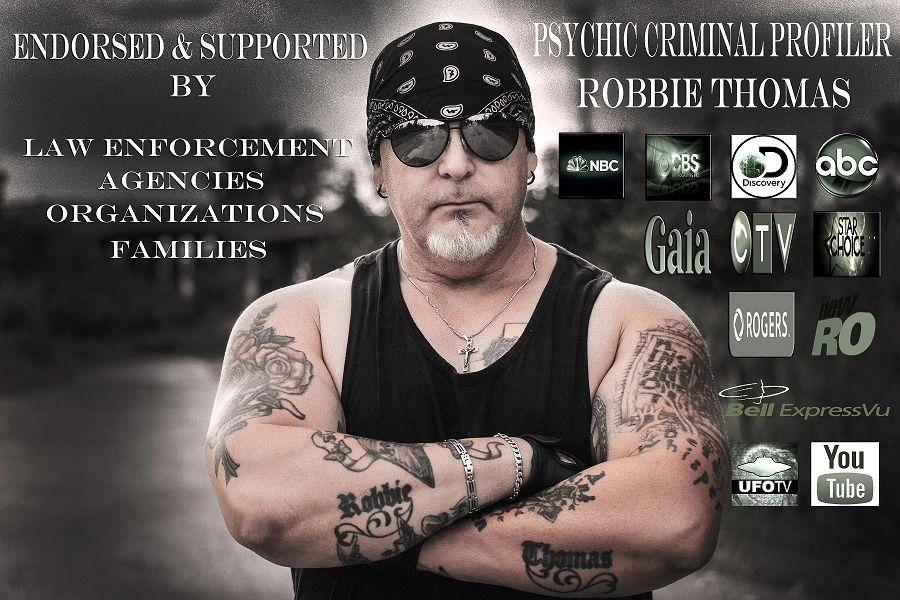 "You Can't Hide From The Minds Eye"

Robbie Thomas has assisted Law Enforcement, Agencies, and Families for decades, which has been followed closely in the media for the work he does on murder/missing persons case's. As A Psychic Medium, he has appeared on many television programs, and in the news that center around his ability to find closure to some of the toughest cases known:  NBC, CBS, ABC, GAIA TV, CKCO, Daytime Live Rogers Television, StarChoice, Bell Expressview, New RO (CTV), and many more. Aside from the numerous television appearances, he has been heard on radio shows around the world such as CBS, Coast To Coast Am, Fade To Black, Tracie Austin Show, Midnight In The Desert, ZTalk Radio, Kevin Smith Show, Barbara Mackey Show CBS, True Ghost Stories Show, Keeler Show New York, Bob Fm, The Eagle 103.3 FM, CHOK 1070 AM, The Fox 99.9 and many more.

Robbie has been a keynote speaker at many events and conventions over the years, where he speaks on the various cases he has helped solve. He has also toured on his own in the Ghost Encounters Tour 2005, Power Of Spirit Tour 2007, Psychic Justice Tour 2010, CoExistence Filming/Tour 2017 and many other short tours.

What Law Enforcement Have To Say About Robbie Thomas

Over the many years, Robbie has had the opportunity to work along side many integral Law Enforcement on many levels. This is just some and what they have to say about Robbie.

"Robbie Thomas saved my husband’s life! Doctors were going to take him off life support as they declared him brain dead, and Robbie came to the hospital when I asked him to. He prayed over my husband, and told me what was wrong. Robbie saved his life by telling me to tell the doctors, they were giving him the wrong medicine and that his brain was swollen!" - Julie Kiff , Sarnia, Ontario Canada

“Robbie confirmed my worst nightmare as a mother; however, HE BROUGHT MY DAUGHTER HOME ALIVE!” –Kim Flewelling, Kitchener, Ontario Canada

"While working a double homicide case with Robbie Thomas, we together, were able to distinguish many missing aspects of the case at hand. His ability to see two steps ahead and envision details is remarkable! In another case I had him give details on, the arrests were made exactly how he said it would happen! It was just AMAZING! I don't endorse psychics at all, but Robbie Thomas is one I totally stand behind!"-Retired International Police Chief, Kevin Smith, United States

"Robbie brought closer to my family, which is featured in his book. It was an honor for him to feature my grandfather and uncle in his book, very very professional!" -Larry Ballinger, London Kentucky, United States

These are just some of the plethora of cases Robbie has assisted Law Enforcement, Agencies, Organizations and families with. 'Psychic Profiler The Real Deal - True Crime Cases Vol.1' encompasses various different cases from murdered/missing loved ones to medical miracles. Robbie works closely with many levels of Law Enforcement and has for many years in assisting to bring justice to those victims of heinous crimes.

Critics are loving the amount of proof provided within the pages of his new release, showing from the beginning of the case to the very end. Never before seen documentation that will astound any reader be you a believer or not. Text messages, emails, photo's, endorsements and testimonials from Law Enforcement, Agencies and families.

CLICK THE BOOK ICON ABOVE TO GET YOUR COPY!

Kenny had indeed contacted his family as I had seen him doing. Also, he came home just before Christmas as I explained to Kristal Owen during our session together on his disappearance. Kristal explained to me she had a conversation with Kenny and shared with him the reading I gave on his missing.

Kristal wrote me these words:

"I told him we talked and what you said, his reply was... That's WILD! That's exactly what I was doing at that time!"

We're all just happy Kenny is home with his family and it was a celebration for the Holiday Season!

Sometimes in my hometown of Sarnia, the area people who run into situations beyond their control contact me for help. In this circumstance, a young man went missing and off grid. I read some of the frantic media postings where many believed harm came to this gentleman or that he was passed. In the interim, Kristal Owen contacted me, as she knows the work I do with Law Enforcement, Agencies and families. It was a phone call of real assurances, as I explained what I was seeing and felt. I explained he would indeed contact the family; however on his time. The Letter below is from Kristal Owen and I'm very happy to say, things are as they should be. I'll let you read her words for  yourself.

"In mid September, my family felt despair and that it had been too long we hadn’t heard from my cousin Kenny. We did up a post complete with a picture, explaining we were concerned for his well-being. I fully expected that someone would reach out via inbox, or that he would call and report that he was fine. After a full 24 hours, and over 1000 shares, nothing. It seemed no one had seen or heard from him whatsoever. I opted to file an official missing persons report with the Sarnia Police and within no time, the local police appealed to the public via radio, newspaper, and social media. After a week of barely sleeping and constant distraction from anything in my routine, I desperately reached out to Robbie who immediately agreed to help. He called, giving some information that finally allowed me to have relief and be able to sleep a bit more soundly. He explained my cousin was alive, in another city, and not in great circumstances. As time went on, the post continued to circulate vigorously, as the police appealed to the public a second time to no avail. We started to fear the worst, UNTIL roughly a week ago when the details in Robbie’s reading yielded the truth. My cousin was in fact fine! Although the circumstances weren’t ideal, and it wasn’t necessarily a “happy ending”, we now know the truth. He is struggling with his demons, and in time, will find peace by coming home. This is the assurance Robbie has given us and has come to be true.

"Robbie Thomas saved my husband’s life! Doctors were going to take him off life support as they declared him brain dead, and Robbie came to the hospital when I asked him to. He prayed over my husband, and told me what was wrong. Robbie saved his life by telling me the doctors, they were giving him the wrong medicine and that his brain was swollen!"

"Robbie brought closure to my family, which is featured in his book! It was an honor for him to feature my grandfather and uncle in his book, very very professional! He uncovered much in this cover-up and double homicide."

"This is a parent’s worst nightmare. I felt ashamed, totally lost and helpless! Out of the goodness of his heart he was able to verify my worst nightmare and supported me through this terrible ordeal of my life. He helped me bring my daughter home ALIVE!"

"I have been extremely blessed to have been introduced to Robbie Thomas, and have maintained a lasting relationship with him since. Other endorsements may label him “The Real Deal”, but that’s not even in question here. The importance of what Robbie is able to do is monumental. What he does, brings healing, closure (be it good or bad), compassion, and hope to those who are grieving."

"Very powerful stuff, Robbie Thomas has skills that most Police Officers could only dream of. He is the REAL DEAL!" I've had the opportunity to work a very high profile case with him and it is amazing how his ability renders tangible clues from his sight."

Robbie Thomas On Fade To Black

As a Psychic Medium Criminal Profiler, Robbie Thomas walks in the world of murderers, child abductors, thieves, and others who harm society. His role is to see clearly and bring resolution to cases that have run into snags or have gone cold. In this frank conversation, Robbie shares what it's like peering into the world of  "monsters" who are consumed with darkness to bring peace to the families of the victims left behind and prove that life goes on past our deaths!

ROBBIE THOMAS ON CBS NEWS ABOUT THE BREWER FAMILY HOMICIDE

With a deathbed confession from the main murderer, to interrogation videos that clearly show mishandled case, evidence of a bloody knife found at crime scene (not) taken into account and so much more... this case has been botched!

Read the family's story in the Sentinel Echo Newspaper and the facts of this case that is now catching national news in America.

“It was a cover-up,” said Rosalie Brewer Simpson, one of Herbert Brewer’s surviving children. “We know the story, how it happened. The sheriff’s office covered it up. A person saw three men coming from the trailer and one of them was carrying a gasoline can. Even after interviewing her, the police just threw it off.”

Simpson said the Laurel County sheriff at the time, after losing his bid for re-election, gave the family a going away present—photos.

“He just threw a bunch of negatives at us,” Simpson said. “My sister and I took them to Walmart to get them developed. What we saw when we got the prints horrified us.”

“I saw the photos of their bodies burned up,” Simpson said. “My dad had one of his arms cut off. My little brother had a knot in his forehead the size of a baseball bat. The police wouldn’t do anything. They said we were ignorant and stupid.”

When the two men and members of the family visited the scene of the fire, Thomas felt strongly that the Brewers were robbed and killed before the fire had been set.

“They got a taped confession from one of the suspects,” said Larry Ballinger Jr., grandson of Herbert Brewer. “We heard the confession. Then when DeLay gave the tape to the investigator with the sheriff’s office he took it into a room, then came out and said there was nothing on it.”

“We heard the tape,” Simpson said. “One of the suspects confessed. The whole family heard it. They (the police) wouldn’t let Andy (DeLay) and Robbie (Thomas) go into the room with them when they got the tape.”

Sign up at Robbie Thomas Psychic Medium Criminal Profiler to hear about events and specials.